The Chinese government is currently interning hundreds of thousands of the country's Uighur Muslim minority. In an interview, Jewher Ilham, the daughter of human rights activist Ilham Tohti, who has been sentenced to life in prison, calls on the European Union to take action against Beijing.

Uhr, Jan.8.– Jewher Ilham, 25, is the daughter of Chinese economics professor Ilham Tohti, who was sentenced to life imprisonment for his advocacy of the rights of China's Uighur minority.

She went to the United States on her own in 2013 after her father's arrest at an airport. He had taught at Beijing's Minzu University until early 2014 and was considered to be the last moderate activist working on behalf of Muslim Uighurs in China.

Since his arrest, Ilham has received several prizes on her father's behalf, most recently the European Parliament's Sakharov Prize in December. The Sakharov Prize has been awarded by the European Parliament since 1988 to people or organizations working to promote human rights and fundamental freedoms. The prize is named after the late Russian dissident and physicist Andrei Sakharov and is endowed with 50,000 euros. 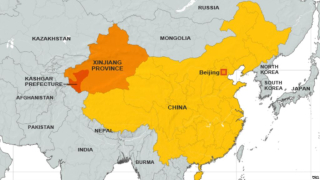 DER SPIEGEL: Ms. Ilham, the Chinese government has set up a repressive police and surveillance state in the Xinjiang region, where hundreds of thousands of Uighurs have been interned. In December, the European Parliament awarded your father the Sakharov Prize for freedom of thought. Do you feel the European Union is doing enough on behalf of the fate of the Uighur people?

Ilham: I think this is a start. But there is a lot of room for improvement. I am looking forward to seeing more action.

Please, help with your valued donation to offset the cost of maintaining this site and to assist us in our quest for democracy and human rights.
This site does not receive funds
from any government or institution.
Any amount in any major currency, from $1 up, makes a difference!
Just write down your generous donation to Democracy
in the space below:

PAYPAL is the safer & easier way to contribute. You may use your credit card too. Thanks for your generous donation! For more info: freedom@participatorydemocracy.net.